George Floyd Death: Why Knees Should Not Be Used During Arrests

Whenever the cops kill an innocent black man…

they always say the same thing.… “It’s not most cops. It’s just a few bad apples.” Bad apple? That almost sounds nice. I’ve had a bad apple. It was tart. But it didn’t choke me out.

Here’s the thing. I know it’s hard being a cop. They put their life on the line on a daily basis. I know that shit’s dangerous. But some jobs can’t have bad apples. Some jobs, everybody gotta be good. Like… pilots. You know? United Airlines can’t be like, “Most of our pilots like to land. We just got a few bad apples… that like to crash into mountains. Please bear with us.”

In George Floyd’s case, there were 4 bad apples. These were 4 too many. The scary thing is most police departments are littered with rotten apples who never get fired until they kill an innocent person and it receives national attention.

Two of the officers had multiple complaints filed against them that they were disciplined for. That means they violated their own police procedure and broke the law. Police officers accuse people of breaking the law. What about when police officers break the law? Who do you call when the police murders?

Police officers have “qualified immunity” that protects them from being sued for wrongdoing that they do when on the job. So far, courts have let police off the hook unless their behavior violated “clearly established” laws or constitutional rights. Does this extend to an unjustified killing on the job?

Let’s look at the Fourth Amendment of the US Constitution. People are guaranteed the right against “unreasonable search and seizures” and this right “shall not be violated.” An arrest is most certainly a seizure. Let’s look at whether an officer putting his knee on George’s neck was “unreasonable” by Minnesota law.

The use of deadly force by a police officer in the line of duty is justified only when necessary:

There was one officer pinning George’s legs together, one officer with a knee in George’s back. With George in the most submissive position a person can be in, there is no way the third officer’s knee was necessary to protect any officer from bodily harm.

George had no weapons and was not accused of anything besides a non-violent offense of using possible counterfeit money.

George was already handcuffed before he was thrown to the pavement. So there is no way the officer can later claim he was in danger of getting hurt by George, especially when George was already pinned to the ground by two other officers. 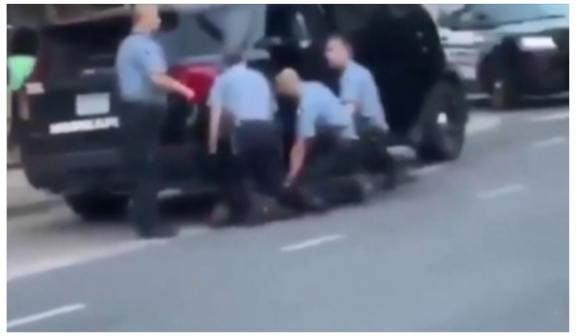 The Minneapolis Police Department Policy & Procedure Manual provides the rules on police conduct on use of force.

They define two types of resistance.

George cannot fall into the Active Aggression nor Active Resistance category. He already had one officer pinning his legs and another officer kneeing his back. It can be argued that because George was not complying with officer’s commands to get in the back of the police car, he was Passively Resisting.

These are their rules on when each type of neck restraint is justified.

There was one officer pinning George’s legs together, one officer with a knee in George’s back. With George in the most submissive position a person can be in, there is no way he was actively resisting.

Even if George was passively resisting (which we don’t concede), neck restraints are clearly prohibited by the Department’s Procedure Manual.

Ignorance of the law is not a defense for normal people in Minnesota. So when a police officer breaks the law, shouldn’t they be held more accountable for their actions?

← What Is the Role of the Judge in a DWI