Alex Jones DWI: An In Depth Legal Review By A Lawyer Scientist

According to the arrest affidavit by the Deputy who arrested Alex,

this is the timeline of events on the night Alex got arrested.

The DWI Law in Texas is:

As you can see, the last way is the only objective way for the state to prove that someone is DWI. But for Alex Jones, his BAC was under the .08 limit. Case closed? Not so fast.

The average person absorbs alcohol between 14 min on an empty stomach to 2 hr 18 min on a full stomach. See Dr. Dubowski’s research in his 1985 study “Absorption, Distribution, and Elimination of Alcohol”.

The average person absorbs alcohol between 18 min on an empty stomach to 1 hr 38 min on a full stomach. Alex was at a sushi restaurant, which isn’t known to be quick on service. Alex ordered sake (I personally called the sushi restaurant to confirm that they don’t serve a bottle of sake, but a smaller flask of around 6 shots of sake which costs $10). The server brings out sake first, so people can start drinking while they wait for their food to come out. It’s safe to assume he was at the sushi restaurant for about an hour drinking sake and eating sushi before he walked home, which took another hour. So by the time he got home, he would have surpassed the 1 hr 38 min absorption time for a typical person on a full stomach. 5-10 minutes after leaving his house, he gets pulled over and arrested and he takes the breath test 2 hours after he gets pulled over. An average person eliminates about .015 BAC per hour. So that would put him at .03 higher than at the time of the breath test.

Here’s an example of a breath test result from one of my Travis County DWI Cases the State chickened out on at the end right before trial. 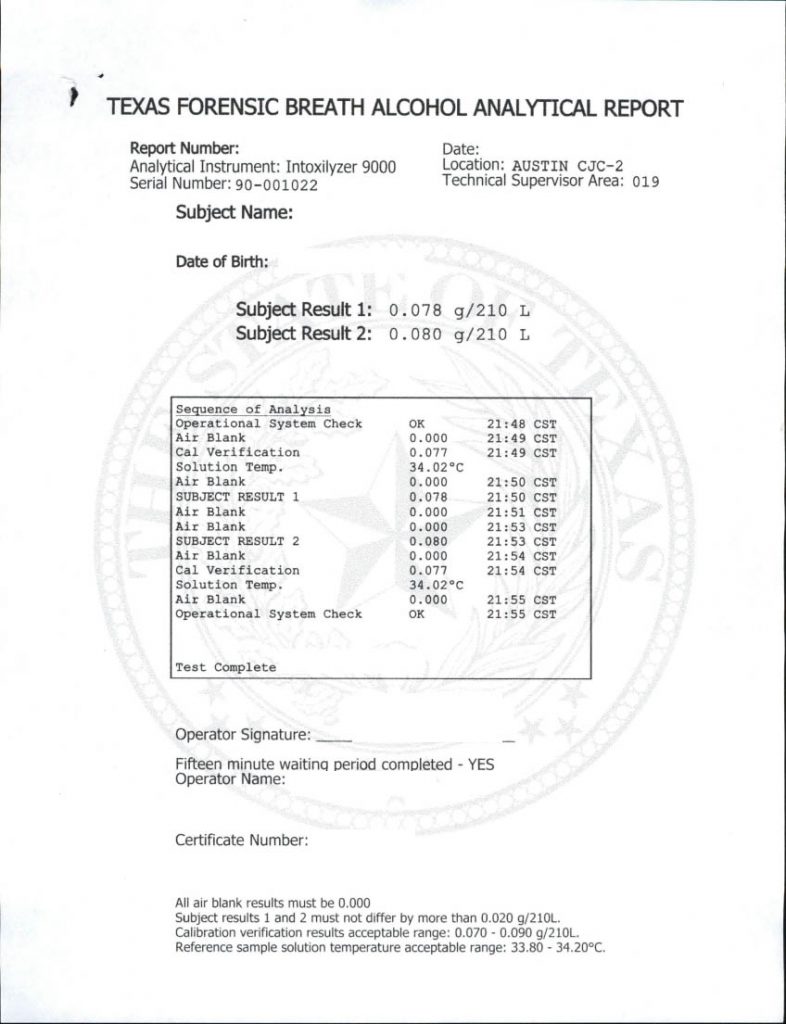 The only way for the state to backward extrapolate is if the officer asked all the right questions to Alex when he was arrested.

The government is known for using junk science. So the Criminal Court of Appeals has ruled on a case called Mata v. State which sets forth these required questions have to be answered before the government analyst (just a more senior cop) can come to court and backward extrapolate someone’s BAC above .08 and send them to jail.

The only way to confirm whether or not the cop asked all these questions and whether Alex responded is by the dashcam videos obtained from the Travis County Sheriff’s Office (Sheriff’s).

What about bodycam videos? Austin Police Department (APD) is the local police department for the City of Austin. And all of their officers patrol the streets of Austin, and they have funding for bodycams and IPhone 10’s or all officers. BUT the Sheriff’s Office is a separate police agency than APD. The Sheriff’s Office runs the jail and the courthouse in Travis County, and only some of their deputies patrol the streets. The main difference is the Sheriff’s deputies do not have high resolution bodycam footage recording the entire encounter, which APD officers do have. This is important later on when we talk about the field sobriety tests, particularly the eye test.

The second most important difference between the Sheriff’s Office and APD is that APD has a specific DWI Enforcement Unit consisting of 15 police officers who patrol downtown and other major bar areas and arrest people for DWI. They pull people over for frivolous traffic violations like going 5 mph over the speed limit or failing to signal when changing lanes. And once they start talking to you in your car, they allege they smell “a strong odor of alcohol”, “a moderator odor of alcohol”, or “a faint odor of alcohol”. The first question the cop will ask you is where you’re coming from. And if you tell them you’re coming from a bar, you’re going to jail. The next question they’ll ask you is how many drinks have you had. If you tell the cop you only had no alcohol, they’ll think you’re lying. If you tell the cop you only had one beer, they’ll think you’re lying. If you tell the cop you have two beers, they’ll think you’re lying too. Only when you start saying you had three or more beers, do they think you are starting to tell the truth. So there is no way out. You better pucker up your ass cheeks, because you’re going to the big house.

The next step is they will ask you to step out of your car and “ask you to do some tests to make sure you’re safe to drive.” They are asking you to do field sobriety tests, which are tests designed to make you fail.

These APD DWI Enforcement officers have the most experience with asking the right DWI questions and testifying in court. However, the arresting officer in Alex’s case was a Deputy with the Sheriff’s Office. These officers have the same basic training as any other law enforcement officer in Texas, which is minimal. And the questions that are often unanswered during trial are:

If the officer did not ask these questions, the State cannot prove Alex’s BAC at the Time of Driving, thus Alex Jones will be found Not Guilty of DWI at Trial.

Assuming the offense report does not include these details, the government analyst is barred from backward extrapolating the BAC from time of driving. But this must be brought up by the defense attorney and articulated to the judge hearing the case. Alex Jones hired Minton, Burton, Bassett & Collins, a high end criminal defense law firm. So chances are, his lawyers will bring up this argument.

When the defense attorney asks the government analyst, “you don’t know what Alex’s BAC was at the time of driving, do you?”

The government analyst has to say, “I don’t know.”

And this does not meet the burden of proof for the State which is Beyond A Reasonable Doubt. And Alex Jones will be found Not Guilty of DWI.

Field Sobriety Tests: The Biggest Sham in Government “Science” to Arrest People and Profit from Citizens

Most normal, sober people in America will fail these tests on their best day, completely sober. This makes these tests flawed.

How did these tests get past muster and started being used by every police department in every city in the United States? Well, for starters, they were government tests funded by the government conducted in government labs. They were never peer reviewed by non-government scientists before they were unleashed onto the police force as a tool to arrest people.

Now I’m not saying drunk driving is good. But these are tools that police officers rely on to take away people’s freedom and liberty. People get their car towed, and they have to pay bail to get out of jail, and on top of that, they lose thousands of dollars on a lawyer (although all of my clients love me and think I’m worth every penny), or lose thousands of dollars on probation if they don’t fight it and just plead guilty.

These tests were designed in the 70’s and 80’s by the International Chief of Police in Los Angeles, California. Ever since then, the National Highway Traffic Safety Administration has funded millions of dollars into the research and testing into these “field sobriety tests,” which consist of three tests:

Have you ever taken a test in school where the teacher never told you what you were being tested on? Well these are field sobriety tests.

Officers take a full 3 day course that consists of 24 hours of instructions and practice on these three tests. But they expect you to do it perfectly your first time. Or your ass goes to jail. During their class, they get brainwashed for 3 days where more senior DWI cops tell them the only reason there are DWI fatalities are because of them. It’s because they are not making enough arrests. Now they get unleashed into the world.

Here’s how accurate these field sobriety tests are.

This means that officers could be correct just as much as if they flipped a coin after pulling someone over when investigating them for DWI. I love our police.

Here’s the kicker. It pays to be wrong. This is the government propaganda that is on billboards throughout the US and Texas.

This is not the law.

The DWI Law in Texas is:

The government is hoping people don’t fight their charges and pay these outrageous fees.

Your only two options are to accept the government’s offer or to reject it and request a jury trial.

The State has the burden to prove that Alex Jones was intoxicated beyond a reasonable doubt. They will not reach this burden.

I had a DWI that was set for trial, who’s BAC was .078, I would draw this out on a big piece of paper during my closing argument.

And tell the jury that this is the perfect example of government overreach and overzealous prosecution by the police trying to tax its citizens with criminal laws, and not the tax code.

This is not the first time the government has proceeded on BS DWI cases. They are notorious for not offering any dismissals on DWI arrests that have NO breath and NO blood test, meaning the State has no actual BAC number. What a waste of time and government resources. The judges get paid $150K a year. The court reporter and the bailiff has to be there. And most importantly, 6 normal hard-working citizens have to take 2 days off from work and get paid $10 a day to sit through some bullshit.

All in all, Alex Jones is not the type of man to get bullied around by the government. If Alex Jones takes his BS DWI case to trial, he has a strong likelihood of getting a Not Guilty verdict from the jury.

← 5 Reasons You Should NOT Fear a Trial by Jury